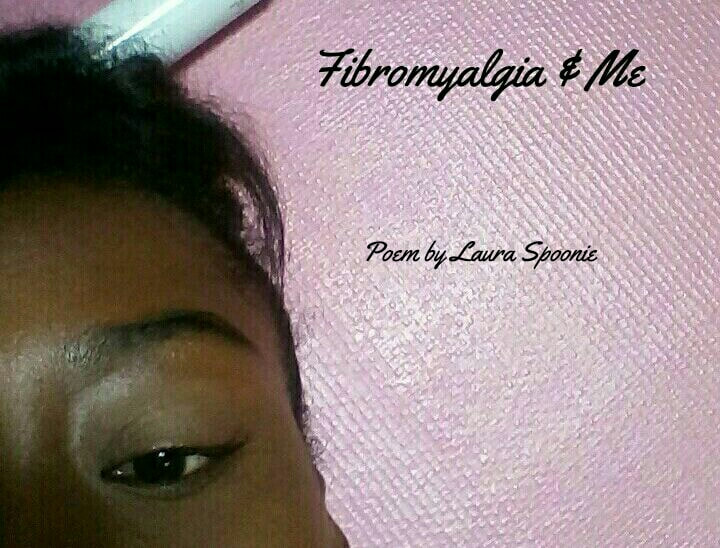 As May is Fibromyalgia Awareness Month I thought I’d write my first free verse poem.
I wanted to write something where fellow chronic Illness sufferers could relate to and where someone that doesn’t know what it feels like to have Fibromyalgia can get an idea from the words that I use.
I wrote this in a couple hours, during my ongoing flare up on May 12th and was determined to get it up before the sunset. I hope you enjoy it
LOVE,
​L.S
XOXO

I lay my head down but not by choice.
Gravity seems to pull me that way, you know, towards my bed.
My eyelids are heavy and fatigue shadows over me like a grey cloud that’s ready to release a downpour…only there’s no rain in here, it’s just my tears rolling down my puffed up cheeks

The tears come as a deluge, a deluge so grand I drown in them
Gasping for air and trying to catch my breath as I bawl inside my sheets
I can’t help it, it’s the only way I know how to release the pressure and exhaustion that builds up inside of me
The pain is overflowing and so are my tears

It feels as though I’ve been hit.
Hit by an invisible object that’s left me with this Invisible Illness.
Muscles are stiff and sore you’d think I’ve been out on a battlefield, but I haven’t.
I haven’t been anywhere but here, these four walls and me.
Fibromyalgia and me

A sharp pain shoots up my legs and heads straight for my chest
I don’t get many warnings around here
Relentless pins and needles make the slightest touch feel like an attack on my skin
An attack that my body has inflicted, on itself

Breathlessness is constant
I’m convinced my lungs are guarded by little mini soldiers that refuse to let air in
There’s enough oxygen to go around, but my body doesn’t seem to think so
So it fights, it fights for the oxygen that should be so easy to attain

Someone’s turned the light on in the hallway.
My eyes burn with irritation as the slightest iridescent bothers me
I pull the covers over my face to shield my eyes as I try to dim the symptoms

The doorbell has gone, there’s a visitor but I can’t make out who it is
I hear them in the passageway saying, “Oh, she’s sick again”
They sound more fed up with me than I am with myself
It must be so hard to be healthy all the time

My mind is a maze I haven’t been able to escape.
I should know the layout by now, after all, it is my mind.
A foggy mist occupies my thoughts, swapping clarity with confusion and I have no recollection of why I’m here, why I feel like this and how I got this bad.

Does anyone remember me? Do they know I’m here?
What day is it today? I’ve lost track of the time.
I spend my day tossing and turning, back and forth trying to find a position to lay in.
But there’s no such thing as a comfortable position when everywhere hurts

Painsomnia hits me but fatigue has won the war today
My eyelids are closing again by a force way beyond my control
Maybe if I wake up the next time around things will have changed? Maybe?
A small sense of Hopefulness never escapes my thought of possibilities
A thought that one day I’ll be able to separate us two
Fibromyalgia and me.

One thought on “Fibromyalgia & Me”